Aragon, who is Latina, cited her membership and leadership roles in organizations on campus, including Lambda Theta Alpha Latin Sorority, Martin Luther King Jr. Scholarship Association and Educational Opportunity Program (EOP), as inspiration to speak up for students, especially those from marginalized backgrounds.

“I’ve been able to hear all these different types of voices, not just one singular group,” Aragon said. “That's what being a leader on Seton Hall’s campus is –– not just doing something for yourself but for others.”

Although Dieu does not have experience in SGA, she discussed her activism in high school as Black Student Union president and efforts to diversify the local police department where she says there were no officiers of color. She also spoke on her upbringing in rural Georgia, where she said Confederate flags and swastikas were openly displayed in her neighborhood.

“As a young girl, I accepted this polarity as an aspect of life I would have to endure. However, I want to use my voice and the voices of others to marry the two worlds I once floated between,” Dieu said.

New to SGA, Dieu framed herself as an outsider.

“If I can be frank, I hate politics. Politics, particularly in our age, has been more about achieving status with little concern to the desires of the voiceless,” Dieu added. “Even though I dislike politics, I love people.”

Aragon, meanwhile, emphasized “importance of having an SGA background” in running for president as she is familiar with the procedures of SGA leadership.

Both candidates discussed recent sexual assault allegations against an RA, with Aragon’s ticket focused on revising hiring policies for leaders on campus, and Dieu saying she wanted to partner with organizations like SHU Survivors to advocate for sexual assault survivors on campus.

Dieu also said she wanted to expand protections for survivors through establishing different levels of no-contact orders dependent on the reason.

“A lot of our initiatives involve making sure that information about how to report things like sexual assault or even maybe more minor but still serious things like being stalked and followed,” Dieu said.

Dieu cited the statistic that Seton Hall ranks third in the nation in the list of colleges with the unhappiest students and the net tuition and said her platform will prioritize students’ mental health. Dieu said her plan is to partner with local “women and minority-owned counseling services” to assist the University in providing accessible mental health care to students.

Aragon said she wants to remedy commuter issues such as students in programs such as occupational therapy and nursing who commute to the IHS campus from South Orange and as a result have to pay for two parking passes and improve the parking spaces on the South Orange campus.

Dieu said that she wants “parking to become more affordable for students and I want to do that on a realistic timeline.” She also said she wants more watch on parking spaces in the event of accidents so that students can be reimbursed for any damages.

Both candidates expressed interest in increasing funding and awareness about funding for student organizations.

“Seeing what we can do at SGA in regards to funding in regards to representation whether it be on the SGA account, money and overall more diversity,” Aragon said.

“We want to do more than give a seat at the table –– we want to give seats at the table,” Dieu said about ensuring multicultural organizations on campus have their funding concerns heard. “And if admin wants to refuse that then we build a new table.”

Following the debate, Dieu was endorsed by the Seton Hall men’s basketball team, Survivors at SHU and the Filipino League at Seton Hall (FLASH).

Amanda DeJesus can be reached at Amanda.Dejesus@student.shu.edu 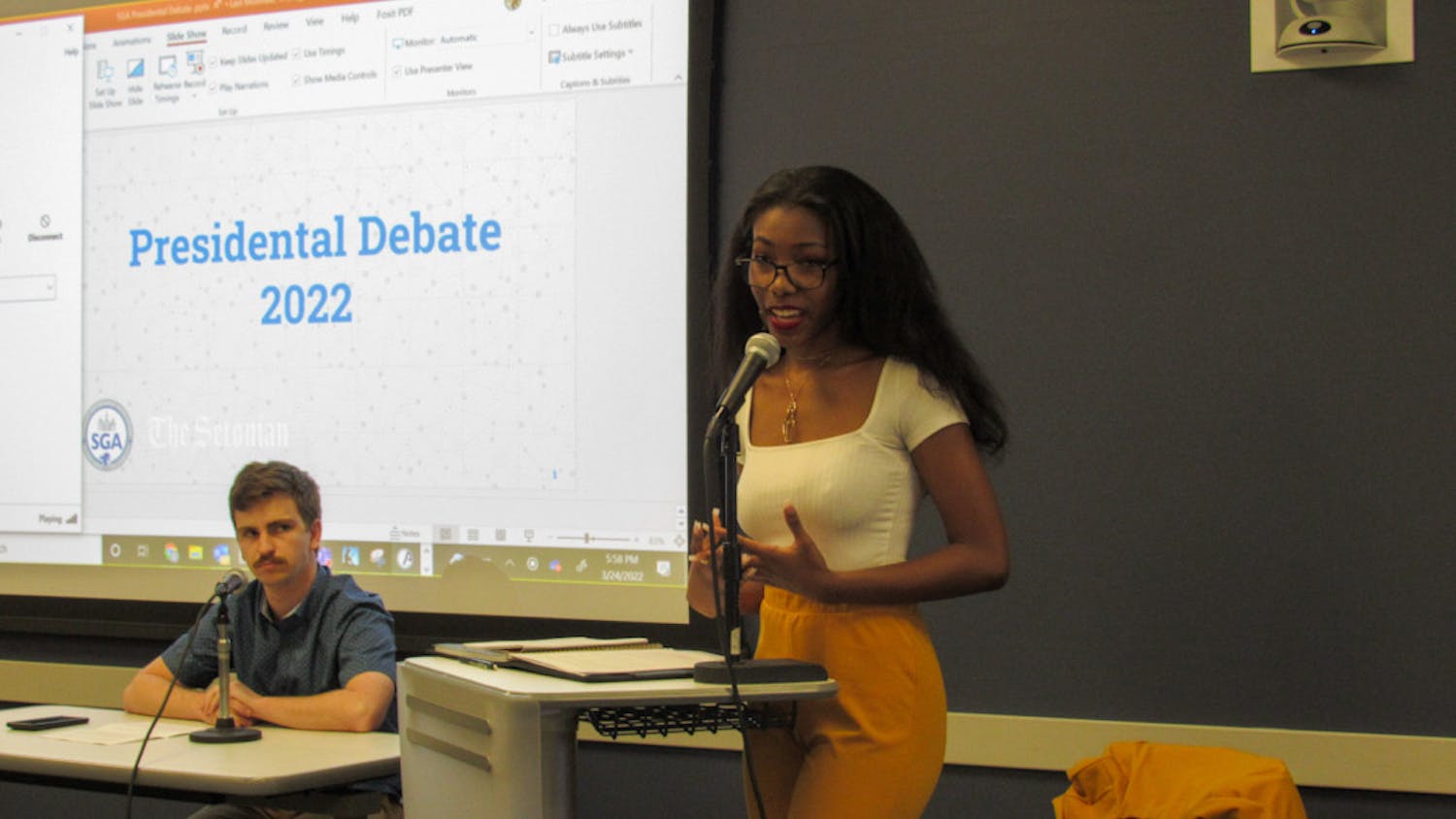