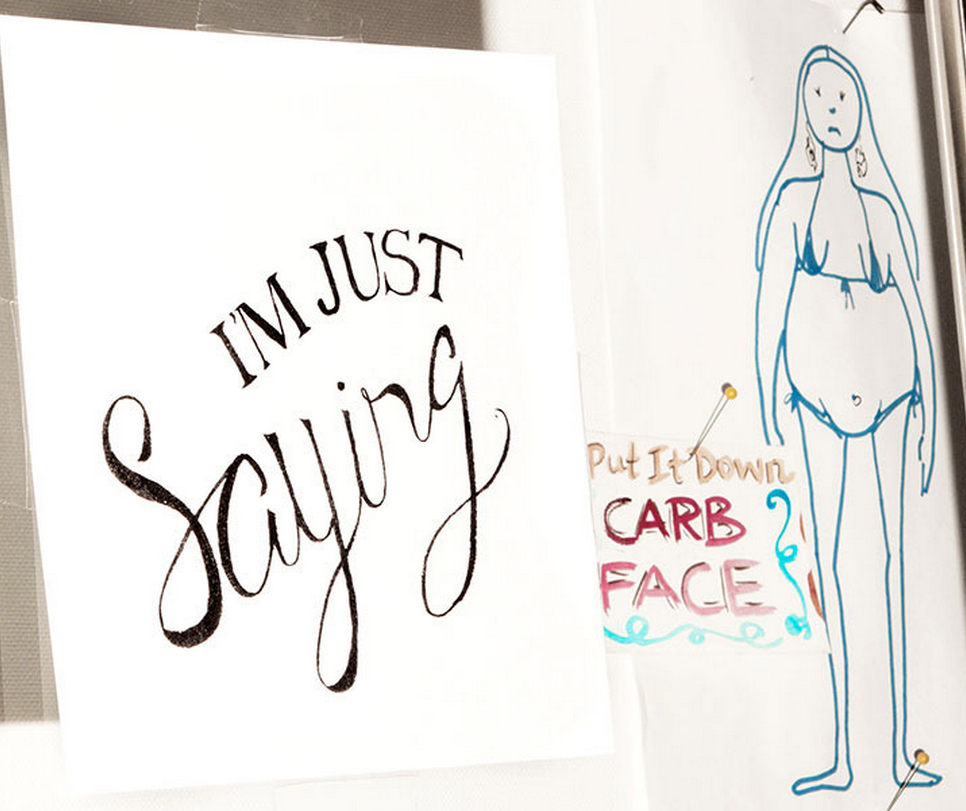 Lilly Pulitzer expanded the business, had a Target collaboration and now the brand is more popular than ever after selling out within a half hour in almost every store. After this success, “New York Magazine” decided to cover the must-see employees and headquarters in Pennsylvania. The public was taken through the bright colored offices and tropical fabrics in a photo tour and it turns out there was more to see than just the brand.

When zooming in on a particular photo, there were remarks and cartoons on the walls and fridges indicating fat-shaming through cartoons. Statements like “Put it down, carb face” were exclaimed in the cartoons next to a drawing of an overweight woman wearing a bikini.

According to the Huffington Post, Lilly Pulitzer’s Vice President of Creative Communication, Jane Schoenborn, released a statement saying, “These illustrations were the work of one individual and were posted in her personal work area. While we are an employer that does encourage people to decorate their own space, we are a female-dominated company and these images do not reflect our values. We apologize for any harm this may have caused.”

With society now-a-days the pressure women feel has risen along with eating disorders. “It is sad. Even if it was just the work of one individual, it still indicates a sense of self-loathing and a fear of obesity that society portrays as disgusting,” said Stephanie Koeller, a junior psychology major and spin instructor. “Don’t get me wrong, I encourage all people to be healthy, but the only way to be healthy is if you accept who you are and love who you are.”

Similarly, Kayla D’Amour, a senior broadcasting major, said when reading the articles all over social media that it was “insane.”

“I fully believe that women in general need to work together to build each other up, not tear each other down,” she said. “The most effective way to change is through positive thoughts and vibes so for this woman to post these in her personal work space is a reflection of her character. If women are posting things like this in their own spaces, how are we ever going to make strides in society?”

Shannon Batt, a junior biology major added, “Certain measurements and sizes are expected and if you do not fit into that mold, you are expected to take extremes to fit into it. I think the most important thing about body image is to have confidence and remember to do what makes you happy.”

In order to move away from these expectations, according to People.com, brands like Aerie have recently taken a stance against this and other eating disorder issues by becoming a sponsor of the National Eating Disorders Association (NEDA).

The company has made a commitment to raising funds, creating awareness and body positivity in its marketing and advertising about the seriousness of eating disorders by not retouching models in any way. The organization also holds over 65 walks a year that Aerie has gotten involved with as well.

Now with the cartoons becoming public, the brand has been criticized for failing to include extended and plus sizes in store. According to the official Lilly Pulitzer site, plus size options are available online only.  Although women have strong opinions on this case and society’s image of the “ideal woman,” people can turn to motivating campaigns on social media like #healthyisthenewskinny and #healthyishot for motivation and inspiration about their bodies no matter what shape or size they are.
Amanda Boyer can be reached at amanda.boyer@student.shu.edu.

Amanda is a senior public relations major graduating in December 2015, a semester earlier than the four-year track, from Hillsborough, NJ. Prior, she was the Photography Editor and now holds the postion of being the Social Media Manager of The Setonian. She is also a freelance photographer for on and off campus events. As a writer, she is also a contributor to CupidsPulse.com, HerCampus.com and TheTaiLife.com.